​"Brexit's a fraud - WE PAY" ​encapsulates WHY the apparently legitimate choice we made to exit from the EU was arrived at fraudulently (read on...). ​And WHY ​we, the majority of our electorate, will be ​forced to PAY as a result.

It is a rally call to those ​from ​ALL political persuasions ​who understand this to be ​the case, and a statement to those who may have voted in favour of Brexit, and who do not yet realise the extent of the deception,​ in the hope ​you may now be persuaded to change ​your mind​.

We have been duped, and if you want to know 'by whom', look to see who actually gains from Brexit - and it is NOT US!

​We’ve set up this website to launch this campaign nationally, and to allow you to order badges and stickers to enable those of us who are utterly frustrated with the idiocy of our country’s political predicament to make a clear and concise and legally accurate protest statement.​

Time is short, if we are to stop this utter nonsense - and if you agree, please go ahead and take a look at the sticker and badge we have designed below.

We hope they will be seen everywhere, through the nation: on cars, windows, T-shirts and notice boards.

Help us get the word out. Give these ​stickers and ​badges to your friends.

FACT: A fraud is when an intentionally false representation is made with the intent to mislead ​a fellow citizen, and that ​citizen relies​ on it "to her detriment."

FACT: A lie runs the risk of becoming fraud if you expect ​a ​citizen to act on the lie. If the ​citizen believed the lie, acted as if it were true, and suffered some kind of injury or financial loss because of that belief, then there may be some liability for fraud.

FACT: ​Those privileged and super-rich elite behind Brexit are buying up Britain's assets at knocked down prices, and we have fallen for this fraud. ​Some moved their money ​out of the UK ​and are laughing all the way to the bank, others have been shorting the pound - a ​device to make huge profits by betting that the value of the pound will go down. This is a racket reeking of curruption ​on an international scale. We ​have been screwed. 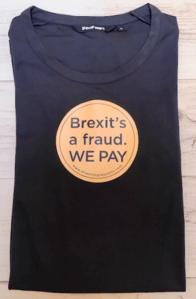 ​​Attach a Car Sticker ​to a T-shirt​

FACT: In the last days of the referendum campaign, the official Vote Leave Campaign laundered nearly three quarters of a million pounds (just under a million US Dollars) through another campaign entity which our UK Electoral Commission has ruled was illegal and has referred the case to the British Police. Yet the British Police are sitting on it, and the referendum result has not ​YET been declared invalid.

FACT: “With this illegal cash, Vote Leave unleashed a fire-hose of adverts of disinformation”… as FRAUDULENT LIES:​
It is ​believed that over ​twenty-five million lies were strategically targeted to ​​three million specific Facebook account holders in the last ​48 hours of the referendum campaign to fraudulently steal their votes. Here are just three of these​:

​
•    Turkey’s 76m people are joining the EU - and they are heading for Britain. (to steal your jobs - a lie)
•    Immigration Without Assimilation Equals Invasion. (implying an immigration invasion - a lie)
•    European Commission report admits Turkish Visa-Free travel will “Increase mobility of Criminals and Terrorists” within the EU. (a total fabrication - a lie)

FACT: “This onslaught of targeted advertising was the biggest electoral FRAUD perpetrated on British Democracy in over 100 years​​​​​ … in a ‘once in a generation vote' that hinged upon just 1% of our electorate”. It renders the result of the referendum INVALID and FRAUDULENT.

FACT: “We in Britain are what happens to a Western Democracy when 100 years of Electoral Laws are disrupted by technology.” “Our Democracy is broken… It’s subversion,​” …. and the Social Media Magnates are “accessories to it”.

FACT: “Our Parliament has been the first to attempt to bring you (the Social Media Companies) to account, and it has FAILED.” Can we have a “free and fair election ever again?” Do the Social Media Magnates want to be remembered as being “the handmaiden of the rise of authoritarianism all across the world”?

FACT: ​​We ​voted to 'Bring Back Control' from Brussels to Parliament - specifically the House of Commons. Gina Miller had to take Theresa May to the Supreme Court to force ​May to allow Parliament to be given a vote on the exit 'deal'​ - the most important change to our constitution in our lifetimes. Boris Johnson has now prorogued parliament to prevent it from ​doing the same, and to get round the Supreme Court Ruling. These are two examples of​ Executive gross abuse ​of power, and disregard of our democracy and our parliamentary ​sovereignty.

​Everything About Brexit Has Been Fraudulent

See what some of our ​Politicians and ​Journalists have to say:

“I have actually got to the point where I am past caring what the deal is we have – I will vote for it  … If those [Brexit] risks materialise, our party will not be forgiven for many years to come. It will be the first time when we have consciously taken a risk on behalf of our nation, and if terrible things have happened to real people in our nation because of that risk, we will not be able to argue it was someone else’s fault.”

There is no place for this sort of complacency - our very democracy and economy is at stake  - people's jobs, people's lives.

​“This onslaught of targeted advertising was the biggest electoral FRAUD perpetrated on British Democracy in over 100 years." 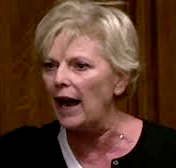 ​"Nobody voted to be poorer, and nobody voted Leave on the basis that somebody​ with a gold-plated pension and inherited wealth would take their jobs away from them"

​A​nd if that's not what people ​voted for, it is emphatically what they've got - unless YOU do your bit to stop Brexit.​

​TH​IS SLOGAN is intended to explain concisely to those who may have voted in favour of Brexit that we have all been the subject of a confidence trick, we have been lied to, and the consequences of any Brexit, hard or soft, will be that we, the citizens of the UK, will pay dearly while those behind the project profit massively :

WE DID NOT VOTE FOR THIS.

Any cookies that may not be particularly necessary for the website to function and is used specifically to collect user personal data via analytics, ads, other embedded contents are termed as non-necessary cookies. It is mandatory to procure user consent prior to running these cookies on your website.